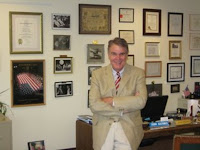 Farmington Library Director Jay Johnston has been appointed to the Connecticut State Library Board by Gov. Dannel P. Malloy.

Board Chairman John N. Barry commented that he is very pleased with Johnston’s selection.
“Based on Jay Johnston’s career and knowledge of libraries and museums, the governor made an excellent choice for this important position," Barry said.

Johnston has served as director of five different libraries in his four-decade career, and is known as an innovator and leader in library and museum work. He lives in Enfield.

“I am very excited to have this opportunity to influence the future of libraries and museums in our state during these times of change for our public institutions,” Johnston said.