On Wednesday, December 5, the Farmington Libraries will show the documentary, “Genetic Roulette,” a film by Jeffrey M. Smith and narrated by Lisa Oz. It is a production of the Institute for Responsible Technology. Following the film, nutritionist Beth Beisel will also be on hand for an informational and intellectual discussion about the dangers of GMOs. The event is sponsored by GMO Free CT.

This event will take place at 7pm at the main library at 6 Monteith Drive.

When the US government ignored repeated warnings by its own scientists and allowed untested genetically modified (GM) crops into our environment and food supply, it was a gamble of unprecedented proportions. The health of all living things and all future generations were put at risk by an infant technology. After two decades, physicians and scientists have uncovered a grave trend. The same serious health problems found in lab animals, livestock, and pets that have been fed GM foods are now on the rise in the US population. And when people and animals stop eating genetically modified organisms (GMOs), their health improves.
This seminal documentary provides compelling evidence to help explain the deteriorating health of Americans, especially among children, and offers a recipe for protecting ourselves and our future. The main feature film Genetic Roulette is 85 minutes.


Advance registration is required for this program. Please call 860-673-6791 for details or register through the library’s web site by using this link. 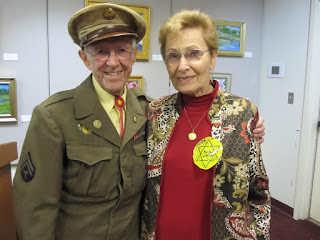 This morning, the Farmington Libraries hosted Henny Markiewicz Simon and Ben Cooper to share their firsthand accounts of their respective experiences with the Nazi Concentration Camps from World War II.  To say they were survivors of their circumstances would not begin to describe their acts of bravery, heroism, and perseverance to overcome the horrors they experienced and witnessed over their prolonged roles in the war. It was an extraordinary opportunity to hear this living history from Henny, a Holocaust survivor, and Ben, a combat medic who took part in the liberation of the Dachau Concentration Camp as assigned with the 45th Infantry Division. Their stories were emotional, humbling, and inspirational and, as intended with this annual Krystallnacht program, commemorated the human spirit's ability to overcome persecution.

Here are a few photos from the event: 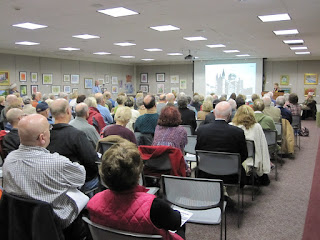 A full house attends in rapt silence as Henny Markiewicz Simon retells her story -- from the day the Nazis came and took her and her mother away to their first ghetto, to her brush with Eduard Roschmann, known as the "Butcher of Riga," to the day when the Russians came and liberated the camp where she had been confined. 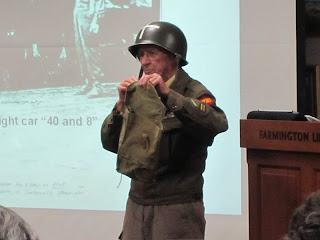 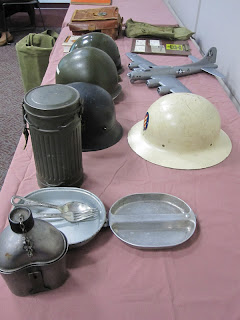 Ben Cooper displayed a number of artifacts collected during his tours in Italy, France, and Germany. This memorabilia included some of his standard issue gear: a canteen, meal set, rucksack, helmet (and lining), a German helmet, his own medical bag and a leather medical bag he took off a German medic-turned-prisoner.  Above, Ben wears the medic helmet issued to him. The cross on the front had to be painted off-center: the Germans used the cross as a target. Moving the target off-center was to help decrease the possibility of fatal wounds in the event of a direct hit. His most prized memento: The yellow Jewish star given to him by a Frenchman after the war was over. 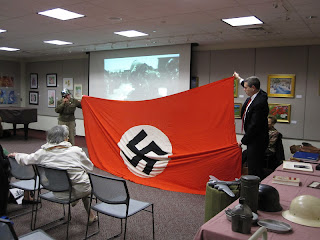 State Representative Brian Becker helps Ben unfurl a Nazi flag, which Ben removed from the Nazi Party Headquarters in Munich.  He later learned that Adolph Hitler had kept an apartment in this building. 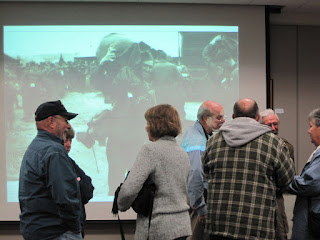 Attendees surround Ben Cooper at the end of his talk.  The picture imposed on the screen in the background is of a young Private Cooper, packed and ready to go home after four years of fighting a long, ugly, evil war across Europe.
Posted by Farmington Libraries since 1901 at 3:10 PM 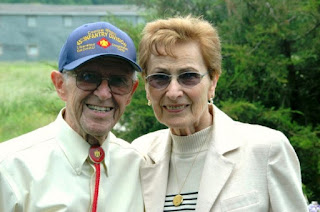 On Monday, November 19, 2012, at 10:00 a.m., the Farmington Libraries will host its sixth annual Kristallnacht lecture with speakers Ben Cooper and Henny Markiewicz Simon. This year the program features the dual telling of stories from World War II and the Nazi concentration camps—one from the perspective of a German Holocaust survivor and one from an American combat medic who helped in the liberation of the Dachau Concentration Camp.

Henny Markiewicz Simon was born and raised in Hanover, Germany, and is a Holocaust survivor. Her father was able to immigrate to Shanghai, China, but she and her mother were not allowed to follow. Her mother was eventually murdered by the Nazis. Mrs. Simon was imprisoned and later liberated in Poland, where she met her future husband. They were married in August 1945 and on Thanksgiving 1949, she and her family moved to the United States where they bought a farm in Colchester, CT. In 1976, her husband passed away and she went back to school to obtain her GED, a level of schooling denied to her as a Jew in Nazi Germany. She remarried in 1981 and helped her husband run his manufacturing business. He passed away in 2001. Since 1986 she has been speaking at schools and other facilities about her life before, during, and after the Holocaust.

Ben Cooper was born in Avon, CT and is a lifelong resident of West Hartford. He was drafted into the army in September 1942, at which time he was sent to Camp Barkeley, TX, for medical training.  In 1944, he married Dorothy Zaitlin and was shipped out to Naples, Italy in September of that year, where he was assigned to the 45th infantry division as a combat medic. He served in France and Germany and took part in the liberation of Dachau Concentration Camp with his outfit. Since 1990 he has been speaking to high school and college students as well as civic groups. He lost his wife in 2009 after sixty-five years of marriage.

Kristallnacht, also referred to as the Night of Broken Glass, was a series of coordinated attacks against Jews throughout Nazi Germany and parts of Austria on November 9-10, 1938. German authorities looked on as SA paramilitary and civilians carried out these attacks and covered the streets with broken glass from the windows of Jewish-owned stores, buildings, and synagogues. At least 91 Jews were killed in the attacks, and a further 30,000 arrested and incarcerated in concentration camps. Jewish homes, hospitals, and schools were ransacked, over 1,000 synagogues were burned, and over 7,000 Jewish businesses were destroyed or damaged. This annual event at the Farmington Libraries commemorates the human spirit’s ability to overcome such persecution.

This program is free and open to the public and will take place at 10:00 a.m. at the Farmington main library located at 6 Monteith Drive.  Please contact the library to pre-register: 860-673-6791, or visit our web site: http://www.farmingtonlibraries.org/.

Director’s College Event: The War of 1812 in Connecticut

On Saturday, November 17, Dr. Glenn S. Gordinier, Robert G. Albion Historian & Co-Director of the Munson Institute at the Mystic Seaport and Visiting Professor of History at the University of Connecticut, will speak at the Farmington Libraries. This event is sponsored by the Sarah Whitman Hooker DAR, the Farmington Historical Society, and the Farmington Libraries.  The topic of his talk is The War of 1812 in Connecticut. A reception sponsored by the Farmington Historical Society will immediately follow the lecture. Copies of the book, The Rockets’ Red Glare: The War of 1812 and Connecticut will be available for purchase for $18 each with Dr. Gordinier available for signing.

The war that inspired Francis Scott Key to pen the poem that later became our national anthem is not one that lives vividly in public memory. To remind us why this war mattered—and why Connecticut residents initially objected to what they saw as an unconstitutional act of military aggression by the US against Great Britain—five museums and historical societies have collaborated on “The Rockets’ Red Glare,” Connecticut and the War of 1812. The companion volume to the exhibition, The Rockets’ Red Glare: The War of 1812 and Connecticut (New London County Historical Society, 2012) by Glenn Gordinier et al., provides a broader focus than the exhibit by placing Connecticut’s involvement within the larger framework of the war and international affairs.

Supported in part by a major grant from Connecticut Humanities, the exhibition draws together artifacts from each of the partners: the Stonington Historical Society, Mystic Seaport, the New London County Historical Society, the New London Maritime Society, and the Lyman Allyn Art Museum, as well as items from other museums and private collections. “The Rockets’ Red Glare,” Connecticut and the War of 1812 will be on view at the Lyman Allyn Art Museum from July 6, 2012 through December 2012.


Advance registration is required for this program. Please call 860-673-6791 for details or register through the library’s web site at http://www.farmingtonlibraries.org. The event will take place at 1:00 p.m. in the Hoppin Gallery of the Barney Library at 71 Main Street.