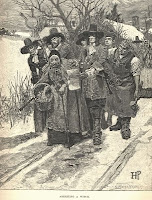 On Wednesday, October 24, Dr. Richard S. Ross, College Librarian at Trinity College, will speak at the Farmington Libraries. The topic of his talk is Witchcraft in Colonial America.

Witchcraft in colonial America is often associated with the hysteria of the Salem Witch Trials, but the first witch trial and execution in colonial America actually took place in Connecticut in the mid-17th century. In this talk, Dr. Ross will discuss the origin and background of witchcraft beliefs on the continent (sometimes called diabolical witchcraft) and its influence in England and later in New England. These beliefs helped to precipitate what has been called the “Hartford Witch Panic” that took place in 1662/1663 and led to the trials and hangings of three witches in Hartford, Connecticut, including Mary Barnes of Farmington.

Richard S. Ross is College Librarian and Professor at Trinity College, in Hartford Connecticut. He holds a PhD in history from Boston College and a Master’s degree in Library and Information Science from Simmons College. His areas of scholarly interest include 19th and 20th century German history; 19th century Prussian administrative history and public health with special emphasis on the pre-March era, epidemic disease in history, European economic and social history from the early modern period, and European and Colonial American witchcraft with special emphasis on continental European and English demonological tracts.

The Director’s College is a relatively new series at the Farmington Libraries, the aim of which is to present interesting and intellectual programs for our community. These events strive to cover a wide range of areas including, but not limited to, professorial lectures with audience participation, performing arts with give-and-take, travelogues, and music series.

Advance registration is required for this program. Please call 860-673-6791 for details or register online. For more information, please view library’s web site at http://www.farmingtonlibraries.org. The event will take place at 7:00 p.m. in the Community Room of the main library at 6 Monteith Drive.