Last night, over 50 people came to the main library for our Director's College event on time travel.   Ronald Mallett, Professor of Physics at the University of Connecticut, presented the documentary:The World's First Time Machine, a BBC/Discovery Channel production that has also aired on The Learning Channel and The Science Channel.

After the film, Professor Mallett fielded a number of probing and thought-provoking questions from the audience, which covered such scientific phenomena as black holes, the speed of light, and even GPS transmissions from satellites. 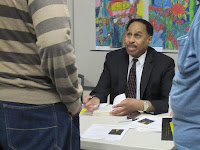 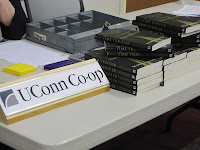 Professor Mallett pointed out that more in depth answers to these questions could be found in his book, Time Traveler: One Scientist's Personal Mission to Make Time Travel a Reality, which the Uconn Co-op made available for purchase.  Discussions continued as audience members lined up to purchase the books and get them personally signed by Professor Mallett. The book is part memoir, part research, but is written in a clear and straightforward way that non-scientists can understand.  The book has been optioned by director Spike Lee's production company.  A script is in the works, and if the rumor proves true, Denzell Washington is the pick to play Professor Mallett in the movie!

The Possibility of Time Travel with Professor Ronald Mallett, 7p.m. on May 23 at the Farmington Library

On Wednesday, May 23, internationally renowned scholar, Ronald Mallett, will show the documentary film, “The World’s First Time Machine,” a BBC/Discovery Channel documentary that features Professor Mallett’s research on time travel.  Following the film, Professor Mallett will also be on hand for a thoughtful and intellectual discussion about the possibility of time travel, and will sign copies of his book, TIME TRAVELER: A Scientist's Personal Mission to Make Time Travel a Reality, which will be available for purchase.

TIME TRAVELER: A Scientist's Personal Mission to Make Time Travel a Reality (Basic Books) is the compelling and touching story of a man whose deep childhood trauma -- at age ten the sudden death of his father -- drove him on a quest to build a time machine in an attempt to go back in time to save his dad. In telling his story, Mallett explains in "easy-to-read" (Publishers Weekly) language and elegant metaphors the physics that makes time travel possible -- based on Einstein's theories of relativity -- and offers what New Scientist's editor Michael Brooks calls an "actual blueprint for a time machine." The title has been reprinted in Korea, Taiwan and the United Kingdom and has been acquired by director Spike Lee's production company.

Mallett received his B.S., M.S. and Ph.D. in physics from Pennsylvania State University. He worked for United Technologies from 1973-5, and in 1975 joined the physics faculty at the University of Connecticut in Storrs, where he has been a professor of theoretical physics ever since. Mallett has published numerous papers on black holes and cosmology in professional journals. His breakthrough research on time travel has been featured extensively in the media around the world, including NPR's This American Life, and the History Channel, Science Channel and Learning Channel. The London Daily Mail said of Mallett: "In pursuit of his seemingly impossible goal, he has overcome poverty and prejudice to become one of only a handful of top-flight black physicists in the United States."

This free library event will feature the showing of the forty-five minute film, a book signing, and Q & A. following the film.  More information on Ronald Mallett can be obtained at his website: http://www.phys.uconn.edu/~mallett/main/main.htm.

Advance registration is required for this program. Please call 860-673-6791 for details or register through the library’s web site at http://www.farmingtonlibraries.org. The event will take place at 7:00 p.m. in the Community Room of the main library at 6 Monteith Drive.

It is amazing how, in the presence of children, people reveal themselves without affect. Indeed, Governor Malloy's visit to Farmington today provided validity, not only to his commitment to education but also to his affection for and love of children and his belief in the critical importance educating young people early and how the  public  library enhances that process when utilized.  Indeed, libraries provide children with a love for and  understanding of the joys of reading.

Governor Malloy was gracious, kind and engaged with all  but particularly with the youngest amongst us including the teens who were so impressed and engaged by him.  In the end, the children's team carried the day and were as spectacular, as always, and communicated the joy of sharing the gifts of story, song, reading and community with grace and acumen. It is without exception again that, Tucker, our reluctant reader dog coach was fabulous as well. I just love working with people who are committed to improving the world one act at a time. And,  I am honoured and joyful with the work children's librarians do throughout the state and country but today I am particularly excited about the people with whom I work; the people of Farmington Connecticut, U.S.A.

In closing,  I wish to thank all the children's services librarians who attended our celebration  from as far away as Stamford  and especially those Farmington Village Green and Library Association (FVGLA) Board members who were able to attend: President George Reider, Vice President, Terry Roberts, Chairman, Mike Andreas.  Library Board members: Chairman, Bill Hayhurst,  Rob Huelin, Allison deVaux, Ida Franklin, Linda Chapron, Andy Baron, Janice Carroll. Friends,  Norma Hartley. Town Councilman Mike Demicco,  School Board Chairperson, Mary Grace Reed. State Senator, Terry Gerratana, and State representatives, Bill Wadsworth and Brian Becker. And, most of all, I wish to thank our wonderful harpist Pearl Rourke and the parents and grandparents who make the time in these busy times to take their children to the library to learn the joys of reading and social development at the the library.

All my best,  Jay 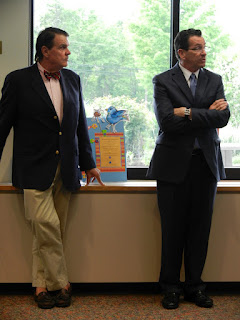 On Monday, May 14, Governor Dannel P. Malloy, at the request of Farmington Libraries Director, Jay Johnston, visited The Farmington LIbrary at 6 Monteith Drive, Farmington.  The event was scheduled to showcase the early literacy efforts of public libraries in the arena of birth thru five programming.

Welcomed to the library by a teen-age harpist, the library director, library board members, local government officials, and librarians from around the state, Governor Malloy toured the building and noted the large number of teens in the teen area.  Arriving downstairs, he was greeted by The Children's Services Staff.  He was given an original design purple summer reading tee-shirt that said DREAM BIG READ at Farmington Libraries, http://www.farmingtonlibraries.org/ in lime green letters, a notebook for recording titles read for The 1000 Books Before Kindergarten Program and a new parent packet that included a diaper bag, a onesie, a bib, three books, a reading list, a brochure of finger plays, a coupon for coffee and biscotti, a bookmark, a magnet with library locations and hours, a library card registration form, and a list of children's program offerings.

Around the perimeter of The Children's Room, Children's Librarians presented mini programs which included BabyRhyme Time, Pre-school Story Hour,Bite Size Science, and Read to Tucker, a Delta certified Reading Education Assistance Dog.  The governor visited each station and saw artistically decorated boards that listed the specific educational goals of each literacy program, demonstrating the importance and value of library programs.  In an impromptu reading, a four year old boy read his book out loud to the governor, proof that early literacy interventions work!

Speeches by Director Jay Johnston, Governor Malloy, and elected officials were followed by the serving of chocolate cake with whipped cream frosting, which read: Growing Readers At Farmington Libraries.  That was apparent to the two hundred people in attendance on Monday, as Farmington made the case for the role that libraries have in literacy and the academic success of our children. 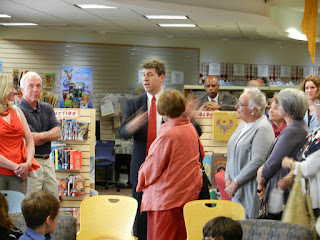 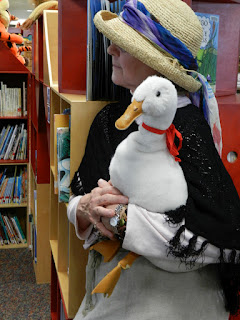 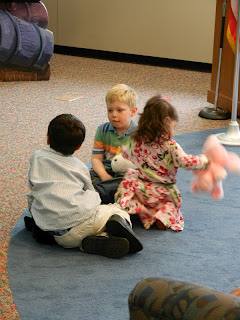 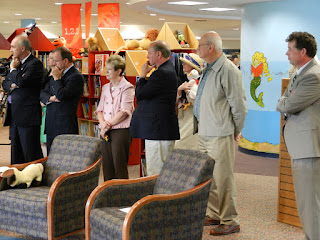 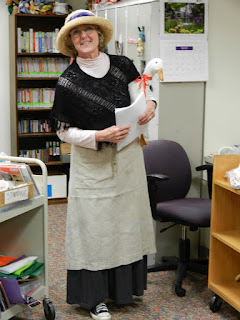 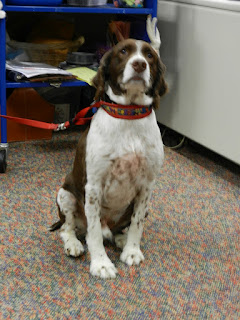 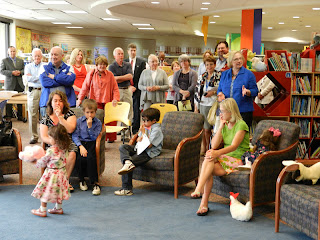 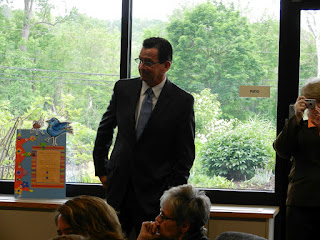 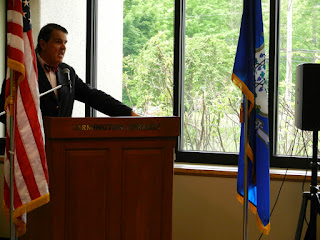 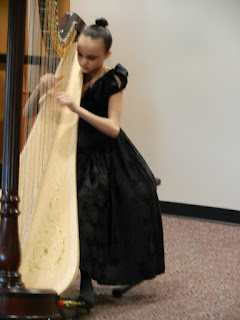