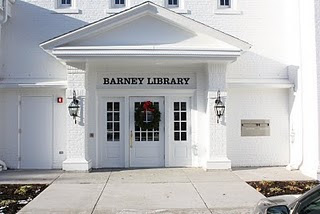 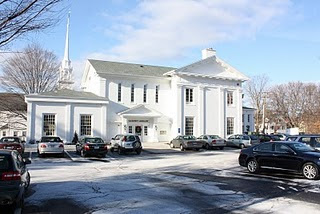 Farmington’s Barney Library is a fine example of Greek Doric architecture. It was designed by Stephen B. Lawrence, and completed in 1918. It is not unique, because many examples of classic architecture can be found throughout Connecticut, and the entire U. S., not to mention Farmington’s many examples. However, the library is a public building and stands in an open area, which facilitates viewing its many interesting features both inside and out.

Using photographs of the library taken before, during, and after the recent restoration, plus pictures of buildings in Farmington and elsewhere, the presentation will touch on the origins of this type of building, and compare its Doric style (or “order”) with examples of the Ionic and Corinthian orders, some of which are only a few feet away from the library, or even in the library.

Some American Colonial details (certainly the doors) of the Barney Library reflect, and perhaps acknowledge, features in some of Farmington’s oldest and architecturally nicest houses. The interior has many reiterations of the Doric order, as well as Roman designs which are often seen in classic architecture and throughout Renaissance and baroque architecture.

The object is to show that this small building exemplifies much of what our culture values highly, and can teach us as much as what is on the shelves.