Directors College Presents: DARK SKY.. An Engaging lecture on the affects of artifical light on the planet and people. 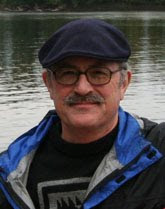 DARK SKY.. An Engaging lecture on the affects of artifical light on the planet and people.
Richard Stevens received a B.S. in Genetics from the University of California, Berkeley, and a Ph.D. in Epidemiology from the University of Washington in Seattle. He has been working for a long time trying to help figure out why people get cancer. A perplexing challenge which Stevens began to engage in the late 1970s is the confounding mystery of why breast cancer risk rises so dramatically as societies industrialize. He proposed in 1987 a radical new theory that use of electric lighting, resulting in lighted nights, might produce ‘circadian disruption’ causing changes in the hormones relevant to breast cancer risk, and thereby play an important role in breast cancer causation worldwide. Accumulating evidence has generally supported the theory. Stevens teaches medical/dental students, graduate students in the PhD program, and MPH students at UConn Health Center.
Posted by Farmington Libraries since 1901 at 1:25 PM