High Peaks and Lofty Dreams;Denali: The High One. At Last. 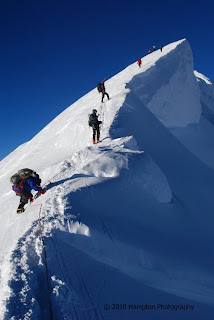 Three times over fifteen years, adventure photographer and high altitude mountaineer Walt Hampton attempted to climb Mt. McKinley (Denali), North America's highest peak. Turned back twice by ferocious winds, unrelenting snows and unmitigated fears, Hampton nearly abandoned his lifelong dream of summiting The High One. But with uncompromising tenacity, he returned this past June to finally stand on top.
Denali sits in the heart of the Alaska Range and has a vertical rise higher than Everest's. Known for its extreme cold and dangerous storms, Denali is not for the unprepared or faint of heart.
Hampton, who climbed with his wife and his son, will share his daring adventures, his struggle to achieve an elusive goal, and his spectacular photography. He'll talk about dreams denied and dreams fulfilled; what it takes to succeed in the mountains - and in life.
Come and explore the possibility of climbing in the Greater Ranges. Come ponder your own dreams of adventure and daring. Or just come and enjoy some extraordinary photos and a great tale. March 30, 2011 the Directors College 2011 series at the 7:00 pm @ the Barney Library 71 Main Street Farmington,
Posted by Farmington Libraries since 1901 at 11:43 AM