By Stephanie Riefe of Farmington Life

The Farmington Libraries are no longer part of the CONNECT consortium and are now part of KOHA. The change was made to save money and to increase services. Both programs are focused on delivery of services such as circulation and cataloguing, Library Director Jay Johnston explains
Q. What was the CONNECT program and why did the libraries stop using it?
A. CONNECT began as an automated system to check materials in and out of then developed into a comprehensive library information system in the 1990s. Farmington had belonged to it since its inception in the early 1980s. It is an organization of many libraries in the capital region and beyond that pay fees for services. The original concept was for the member libraries to collectively create capital through dues, fees and grants for the purpose of purchasing a mainframe computer, proprietary library operational software, central office staff with the expertise to manage the system and to organize the libraries into a computerized regional network. At the time, 1982, this was an innovative and smart way to do business because this structure was developed at a pre-Internet time period. Today, with new emerging technologies and many exciting open-source solutions available, I began to study alternatives to the current proprietary software solutions in order to better leverage our resources in an uncertain economy. Through that research process, I learned that the KOHA system was far advanced in functionality and customization compared with CONNECT and that operational costs were significantly lower than those charged by CONNECT. Convinced of the benefits of going forward, the staff and library board spent more than three years studying, testing and deciding how to proceed. Now we have made the migration from the old proprietary CONNECT library information system to the new, open-source KOHA system. Out new system costs less than 1/5 of the old CONNECT system. KOHA also has a great deal more functionality, running on Linux, Apache, MySQL and Pearl, very similar to the operation of Amazon.com.
Q.Talk a bit more about the new program. How does it work?
A. KOHA is an open-source (non-proprietary) system. We own the software and do not pay fees. We can alter operational procedures as needed and make improvements that were not possible with the proprietary system. KOHA also has an artificial intelligence component that interfaces with individual user’s preference, a feature to which computer users of today are accustomed. It is a web-based system that can be used on any device. Functionality includes creating private and public lists for future reading. We are currently listing high school and intermediate school reading lists in our KOHA catalog. This feature can also be used to create private reading lists for an n individual’s future use. The catalog has a powerful social component allowing Tags for commenting on books, DVD’s, great reads, or other interests (tags for sailing adventure or Danielle Steel junkies). Also, when searching in the Farmington catalog, with the click of a single link you can continue that search in the old CONNECT catalog or statewide system.
Q. What do people need to know about KOHA and how it might affect their library habits?
A. The new system will allow you many of the features you have grown accustomed to in Amazon.com and other modern artificial intelligence information systems, along with traditional library features. It is intuitive and your Farmington Library account reflects only Farmington items. When returning items from other libraries at Farmington, you will be credited with your date of return when it is received by the lending library. All inter-library loan functions can still be enjoyed by contacting the library and requesting an item. However, I believe our collection will sustain 99 percent of our demand with a goal of reducing inter-library loan by developing our collection with a more rigorous customer-focused purchasing system.
Q. Does the new program offer features that were not available before?
A. Yes , indeed, private and public lists to see what you checked out and what you want to read in the future, a cart feature to place multiple holds for your reading interests, tag cloud which gives a personal way of grouping items by interest areas, and an online public access catalog feature which allows virtually browsing the shelves.
Posted by Farmington Libraries since 1901 at 4:25 PM

Farmington Libraries Top All Records With 7,493 transactions in one 12 hour day for 10.406 transactions per minute

Assistant Director of Operations, Tinker Murphy, reports an all-time lending transaction record with loans of 3,508 items and returns of 3,985 for a total of 7,493 items transacted over the 12 hours we were open. Whew, and Well done!
Posted by Farmington Libraries since 1901 at 11:13 AM 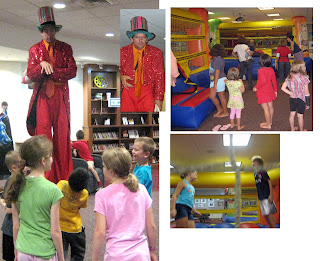 The importance of reading and literacy in general is principal to our mission's focus. The importance of children reading and knowing the joy reading engenders is key to our societies future. In that regard, the Friends of the Library do the community a tremendous service by funding many of the special programs the Libraries develop over the year. This summer was no exception in that commitment. Thank you, Friends of Farmington Library. I would suggest you join the Friends, they are a great group of individuals. 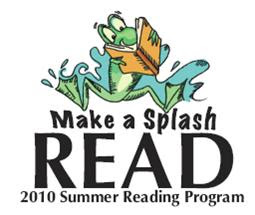 Library Board Member Rob Huelin signs his name to the steel structure about to join the future with the past at the new Barney Library additions and renovations project.
We are all looking forward to the grand reopening this fall... Stay Tuned.. Historically, I highly recommend you click on the header to read the The Barney Memorial Library: Its Origins Over Two Centuries, by Jean Johnson; Part I and part II. 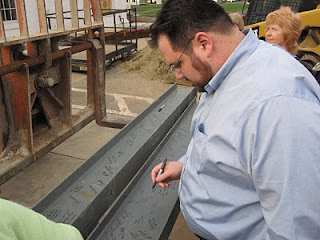 At its' August 18th meeting, the Library Board unanimously voted to adopted Board member Brian Connolly‘s new logo branding the Libraries service mission graphically as the natural; social, intellectual, recreational and cultural connection to Farmington residents. We are excited to see an elegant unifying expression of the Library as our community’s hub and "the place to be!"

Stayed tuned, I will post our new logo soon.
Posted by Farmington Libraries since 1901 at 7:58 AM

Thank You, Hartford Foundation for Public Giving, for identifying the public library as a most valuable community asset. 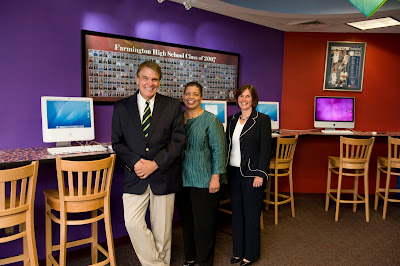 I was so pleased to welcome JoAnn Price, Hartford Foundation for Public Giving board member and Alison Granger the Foundation’s senior investment officer, Farmington resident and library user to the Main Library on Tuesday August 3rd. It was my pleasure indeed, to personally thank these wonderful people for assisting in assessing the need and presenting the opportunity for me to apply for and receive a $30,000 grant for a technology project we have been planning to execute over the past few years. The Foundation has been very generous to Farmington Libraries during my watch with a $ 225,000 building grant required to complete the 2009-2010 $ 3,000,000, Barney Renovations Project, http://www.hfpg.org/NewsStories/NewsReleases/NewsArticle/tabid/517/smid/1546/ArticleID/127/reftab/550/Default.aspx and now by investing $30,000 in public technology. We are very grateful for this needed gift.

Good-Bye JAG… Executive Secretary and Building Superintendent Judy Guglietta, aka jag, decided to retire after 29 years of service here at Farmington. We will look forward to post cards from far off places where she and John will travel. 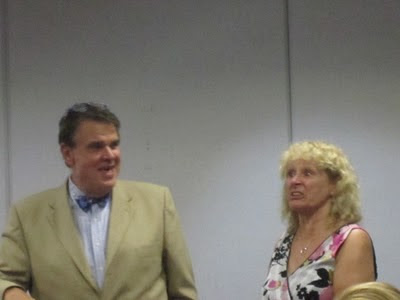 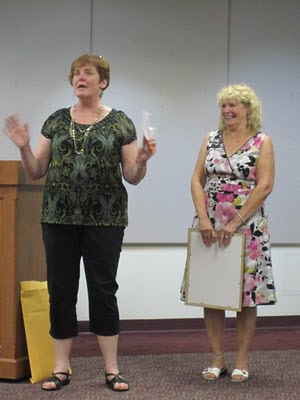 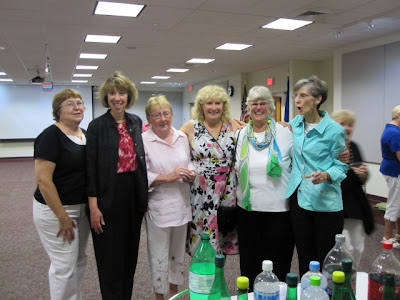