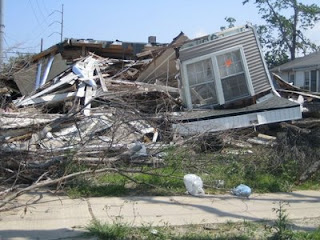 Listen to the NPR report on this adventure @ http://www.npr.org/templates/story/story.php?storyId=5521911


New Orleans is a city of paradoxes, many of which have been obfuscated by the patina and vitality of the French Quarter, Uptown Convention Center and the business district. This became very evident as I volunteered with a Christian relief agency in the Ninth Ward while attending the ALA Conference in June 2006. Leaving our comfortable hotel rooms, our bus load of eager, enthusiastic library workers was driven to our assignments in a large air–conditioned bus through devastated areas filled with small residential and commercial buildings, densely clustered on narrow streets. The scene was reminiscent of the desperation seen in the Great Depression photos of Ben Shahn and Walker Evans.
All eyes were upon us as we disembarked at a small school attached to a Catholic church. The school entrance was filled with young volunteers resting on lawn furniture from their early morning labors; others were filling sprayers with a mix of water and chemicals for the task of killing the mold growing in homes designated as salvageable. Our fresh, well-scrubbed appearance and clean clothing contrasted dramatically with those already at work, many of whom had not showered or had a change of clean clothes for several days or longer.
I opted to help the volunteers by repairing their toilet facilities, which were totally inoperable. I did a bit of auguring, replaced several drain traps, faucets and valves and got the place working as best I could with very low water pressure. When I was finished I decided, on the spur of the moment, to walk the six, very hot miles back to my hotel. I had not eaten anything nor drunk any water all day because the environment and the job I had undertaken were so odious that the thought eating and drinking was repugnant.
At any rate, I ventured forth and soon realized that I was the only pedestrian on those storm-ravaged streets, and a very noticeable one at that, with my bright yellow “Librarians Build Communities” T-shirt announcing not only my tourist status but my vocation as well. As I walked, I eventually came upon several people with whom I interacted. The first asked if I was interested in specific services, which I declined. The second wanted to know if I was a part of the librarians’ convention and was glad to find out that I was.
I began to have second thoughts about my journey, but realizing that I was well beyond the point of no return, I asked a woman on a bike for the best route back to Canal Street. She was very helpful and instructed me on the safest way to go. Not long after, a car came screaming up to me, easily identified as a mark in my yellow shirt, and the driver begged me for four dollars to buy gas. I gave her the money; she blessed me and sped off. I continued onward--hot, tired, thirsty, desperate for a shower and eager to discard my irreparably filthy clothes. Late in the afternoon, I approached the first pedestrian I had seen in nearly an hour. I greeted him with a “Hi” but he looked away and accelerated by with a disdain I could smell. Finally, I recognized a few landmarks and found my way back to my hotel, transformed by my surrealistic experience.
I suppose we all have a propensity to either exaggerate or minimize new experiences in order to fit those moments into what we’ve known before. I was and remain stunned by the socioeconomic and physical mayhem rendered by Katrina; the disastrous results of that cataclysmic event are far beyond the range of my previous experience. The desolation and forlornness I experienced persists. The old New Orleans is gone and all that remains is the memory of what once was.
Posted by Farmington Libraries since 1901 at 8:55 AM