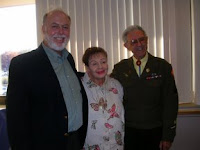 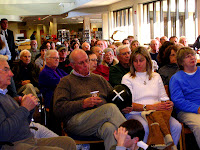 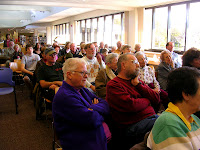 On Saturday November 10th we produced a wonderful program celebrating the Liberation of the Dachau Concentration Camp at the end of the Second World War. Ben “Doc” Cooper, an army combat medic, attached to our 45th Infantry Division arrived at the Dachau Concentration Camp on April 29, 1945 just two days after its liberation. Neither he nor his combat buddies were prepared to witness, firsthand, the terrible cruelty, inhumanity and suffering that was inflicted upon over 200,000 prisoners from more than 30 countries of which nearly one-third were Jewish people killed and burned there by their Nazi captors. “Doc” held his story deep inside until 1992 when a school teacher implored him to share his story with his students. “Doc” was so moved by the care the teacher took and the student’s reactions that he set off over the next several years telling his moving and human story. The audience of 86 was deeply moved by “Doc’s” story, artifacts and the photos of his experiences. I have asked “Doc” to return next year to refresh our memories and learn from the experience of others. I am interested in your reaction to this program and look forward to presenting other timely topics for your benefit in the near future. There is a fine collection of books relating the Holocaust here at the library to bring the true meaning of Veterans Day to us all.
Posted by Farmington Libraries since 1901 at 3:56 PM