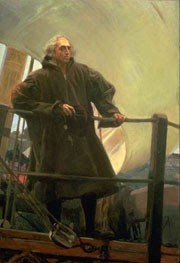 We have celebrated the Italian Explorer’s discovery of the New World consistently in the United States on the second Monday of October since 1971.